What is a VRM? What does it stand for? Why do motherboards and graphics cards need VRMs, and how important are they? Let’s have a look. VRM stands for Voltage Regulation Modulator. It makes sure your GPU (or CPU) gets the required power at a consistent voltage. A low-quality VRM can cause many issues including shutdowns under load, poor overclocking capability and even reduce the life-cycle of your processor.

The above is from a PowerColor Radeon RX 5700 XT Red Devil. The part highlighted by the white box is the GPU Core VRM and the two black boxes show the memory VRM. The red ones are the inductors (chokes), the green ones are the MOSFETs and the blue ones are capacitors. Every VRM will consist of these three components, regardless of the processor or device. There are two more sets of VRMs, one below the core VRM and one to the left of the GPU. These are the SoC and VDDI (memory voltage controller) railings.

They do this by distributing the power amongst the two lanes of MOSFETs, chokes and capacitors available to each doubler. Usually, the PWM controller sees every two lanes controlled by a doubler as one. This allows PWN controllers with support for up to 6 phase VRMs to be used in 12 phase CRM design using doublers.

Again, a 5 phase VRM doubled to 10 is less efficient than a native 7 phase or eight-phase VRM. The reason being that the doublers induce a small delay to the PWM signals, making the whole process slightly less efficient. Regardless, a 10 phase (doubled) VRM is still better than a 5 phase and is a cheap trick to allow a higher power draw.

Do Memory Speeds Matter? Testing the Impact of RAM Frequency on Gaming in Ryzen 3000 Processors 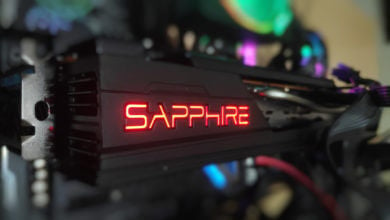