When building or upgrading a computer, most people neglect storage. The major chunk of the budget goes into the CPU, GPU, memory and in some cases your personal RGB fantasies. However, in a modern computer, the choice of storage is quite important. Depending on which drive you go with, you may have to deal with a choppy system or a lightning-fast interface. To the average person, there are two kinds of storage drives: Hard Disk Drives (HDDs) and Solid State Drives (SSDs). The latter is markedly faster but is also priced exponentially higher. In this post, we highlight the differences between traditional magnetic storage (HDDs) and the faster NAND based SSDs.

SSDs: Why are they Faster than HDDs?

SSDs are fundamentally a different kind of storage. They are much closer to memory (RAM) than HDDs both in terms of speed and operation. They are based on NAND flash memory and unlike HDDs have no moving parts. They essentially consist of a PCB featuring a bunch of NAND chips connected to the cache and the memory controller. That’s about it.

Solid State Drives mimic HDDs in computers. The controller of an SSD is quite similar to that of an HDD. The connector and form factor is mostly the same but there are some additional components to interact with the NAND flash memory on the SSD PCB. For this reason, the controller can have a significant impact on the performance and power consumption of an SSD.

What’s an HDD: How Does it Function?

Now, what’s an HDD? HDD is short for Hard Disk Drive. HDDs operate on a fundamentally different principle from SSDs. They’re a mechanical storage solution, with a spinning disk on a platter. Data is written and read from various points on the disk.

The disk itself spins very quickly, at either 5400 RPM or 7200 RPM to make retrieval fast. Despite this, HDDs are several times slower than even the slowest of SSDs. Moreover, reliability tends to be worse with HDDs because they have moving, mechanical parts. The irony is that, while HDDs don’t have a hard read-write limit like SSDs, they’ll probably break down faster due to mechanical wear and tear.

HDDs read data sequentially. The read/write head scans for the data in the allocated sector. When you store data on an HDD, it’s just randomly thrown around. Bits of data form concentric circular paths called tracks. Each track is made up of multiple smaller sectors.

There’s a record of the sectors free and those already filled with data. This is stored in the File Allocation Table (FAT). Here the location of each file is mapped to the sectors. When you search for a file, the computer checks the location in the FAT and then moves the head to the relevant sector. Similarly, when you have to store new data, using the FAT an empty sector(s) is selected and the data is stored.

SSD vs HDD: Which one is better?

Neither is objectively “better,” even though SSDs are the newer technology. They both have advantages and drawbacks. HDDs offer more storage capacity at the high end than is currently feasible with SSDs. Moreover, they’re significantly cheaper per GB. On the other hand, SSDs are much faster. Even the slowest SATA SSDs have read speeds in excess of 500 MB/s, several times faster than the circa 150 MB/s of fast HDDs. NVMe SSDs are way faster, in excess of 2000 MB/s.

Did we mention that it’s possible to use both SSDs and HDDs at the same time? That’s why your motherboard has so many I/O connections! It’s always a good idea to use an SSD as your boot drive. Windows loads much faster on an SSD than an HDD. SSD boots finish in a few seconds–on NVMe, it can be almost instantaneous. Moreover, regular OS interactions–opening apps, copying and pasting files, using the web browser–are all faster on an SSD drive.

HDDs are an Excellent option for Storing Multimedia

On the other hand, it makes excellent sense to use HDDs to store large files, especially your media collection. A large collection of 4K movies, for example, can run to several terabytes. Unless you’re willing to spend a couple of thousand dollars on SSDs, your best bet is to get a large HDD for far, far less. Use cases where data is accessed serially (videos and music, for instance), see no real performance improvements with SSD storage. That means you’ll get the exact same multimedia experience with an HDD as with an SSD.

Games are a different question altogether. Games load large amounts of assets very quickly. If you have a game installed on an SSD, it can cut your load times by an order of magnitude. You can go from twiddling your thumbs for a whole minute to getting back in the action barely a moment after you die.

StoreMI: the best of both worlds!

If you think it’s too annoying/complicated to manage multiple drivers, AMD’s StoreMI function is useful if you have a B450 or better motherboard. StoreMI lets you combine an SSD and HDD into one logical drive. You (and the operating system) only see one drive, but the program uses machine learning to intelligently shuffle data between the SSD and HDD. This leads to SSD-like responsiveness, paired with an HDDs storage capacity. The best of both worlds!

AMD Explains why there Won't be a 48 Core Threadripper

Difference Between DDR4 and GDDR5 Memory Explained: GDDR6 vs GDDR5 vs DDR4 vs LPDDR4 vs HBM 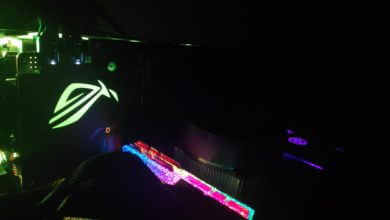