One thing that hasn’t changed in over a decade is AMD’s reference cooler. It’s still the same blower-style cooler that runs hot and looks like a cinder-block. As such, we recommend everyone to get a third party aftermarket Radeon RX 5700 card. The best ones include the Sapphire Pulse, XFX Thicc and the Powercolor Red Devil.

In this post, we compare one of the premier aftermarket RX 5700 XTs, the Powercolor Radeon RX 5700 XT Red Devil and see how it stacks up against the reference model and the competing RTX 2070 Super. We’ll be having a look at the gaming performance, thermals, overclocking capabilities and the PCB design of the two cards in detail. Let’s dig in:

On paper, the Red Devil has a fat advantage in terms of the boost clock. But let’s not forget. The boost clocks in-game depend on a bunch of factors such as temperature, power draw, and voltages. Still, a base clock 165MHz higher than the reference model is impressive nonetheless.

However, the price is a concern. Most of the other board-partner models 5700 XTs such as the Sapphire Pulse, XFX Radeon RX 5700 XT and the MSI Evoke cost less than $400 while certain variants like the ASRock Challenger cost as low as $350. Even if it performs the best, paying almost $100 for the same GPU is a hard pass from us.

The Powercolor RX 5700 XT Red Devil is just a few frames ahead of the reference model, bridging the gap between the RTX 2070 Super and the latter. Red Dead Redemption 2 sees the biggest boost with the Red Devil beating both the Reference card as well as the GeForce competitor by a sound margin.

Even at stock settings, there is a quite notable difference between the two cards. Right off the bat, the in-game core clock for the PowerColor Red Devil is notably higher at 1980MHz while the reference model is limited to 1836MHz. Despite running at a higher clock, the Red Devil ran cooler (albeit by just a few degrees) and quieter. You can turn up the fan speed to improve the thermals at the cost of acoustics, but I would recommend sticking to auto.

Upon overclocking, most titles saw a healthy boost in performance, pretty much erasing the gap between the 5700 XT Red Devil and the RTX 2070 Super, with the former even coming out on top in some games like Deus Ex.

The memory was overclocked by +25MHz which resulted in an effective memory speed of 1850MHz (up from 1750MHz). As for the core, we were able to get a +50 on the core which pushed the in-game clock to 2026MHz. This didn’t have a notable impact on the thermals or fan speed and both remained more or less the same. The reference model started hitting temperatures as high as 110 degrees upon overclocking, so we didn’t bother. That’s way out of my comfort zone.

Furthermore, the reference model appears to be using Samsung’s GDDR6 memory which is again more expensive and reliable than the widespread Micron memory chips.

Turing over the PCB lets you have a closer look at the VRM phases. Turns out the RX 5700 XT Red Devil has a 5+1 phase VRM using doublers to make it into 10+2 phases. While technically that *is* a 10-phase VRM, the reference model is using a 7+2 phase (no doublers here) which is better than the former. So better, capacitors, better VRM, better memory…

Overall, the Reference RX 5700 XT has by far the best board out of all the 5700 XTs. However, courtesy of that blower heatsink that advantage is more or less nullified (unless you decide to stick a water block on it).

Speaking of the heatsinks, where the RX 5700 XT Red Devil is using its signature design, the reference board is once again stuck with its blower-style heatsink. The advantages of the former are quite obvious: more fans and heat pipes result in a quieter and cooler card and the metal built adds to the aesthetics. The reference model with its plastic design has done enough “bending” and is getting rather old at this point. 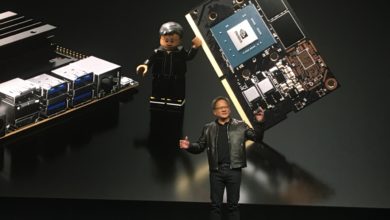 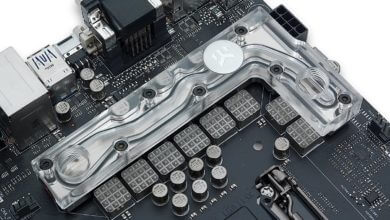