With the imminent launch of AMD’s Ryzen 5000 chips, things are certainly going to shake up in the CPU market. We already saw the 5800X beating the Core i9-10900K in AoTS, but that was just one game. Considering that Intel’s 10th Gen lineup is yet another Skylake refresh and Rocket Lake appears to be a minor upgrade, it looks like AMD is heading for another highly successful year in the client CPU market. In this post, we have a look at the various high-end processors from both Intel and AMD and suggest the best one for you. We will update this post as the new processors are launched. It’ll still be at least another month before you can get your hands on a Zen 3 part.

No matter how dated Intel’s 14nm based Skylake architecture may be, it still retains the lead in gaming, thanks to the high core clocks. With the 10th Gen Comet Lake-S lineup, the Core i5-10600K is easily the best pick. It outperforms the Core i7-9700K and even levels with the Core i9-10900K once overclocked.

As far as the 11th Gen Rocket Lake-S is concerned, I’m not sure if it even exists anymore. Intel didn’t say a word about it at HotChips, and the fact that Alder Lake is set to launch in the second half of 2021 with the new LGA1700 socket means that both the 9th and 10th Gen owners will soon be out of potential upgrade paths.

The Ryzen 5 3600 is an incredibly attractive mid-range CPU regardless of your workloads. It’s on par with the Core i5-10400 in most games and as fast as the 10600K in everything else. However, at present, Amazon is selling the 3600X for just $215 which is a very decent price for 5-10% more performance and additional overclocking headroom.

For people from the subcontinent, I recommend the Ryzen 5 3500. It’s a 3600 without SMT, but that shouldn’t matter in gaming. Plus, it’s much cheaper as well.

AMD’s Ryzen 7 3700X was hands down the best consumer processor of 2019, period. Hell, it might as well have been the best CPU of the decade. With a package power draw of just about 65W, it matches the Core i7-10700K (a 250W CPU) in non-gaming workloads while trailing the Core i5-10600K by around ~10% in gaming all the while costing much less. It just doesn’t get better than that!

No, AMD Infinity Cache Isn't for RDNA 2 GPUs: It's for SoC Architectures (Opinion)

Xbox Series S (Lockhart) CPU to be Faster than PS5’s, GPU w/ 20 CUs and Ray-Tracing Support 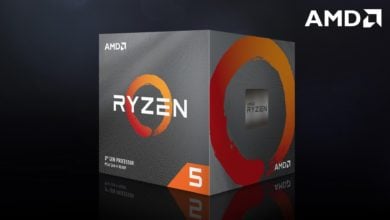