EVGA today launched its flagship graphics cards in the form of the GeForce RTX 3090 KINGPIN Hybrid and KINGPIN and Hydro Copper, both liquid cooled and probably the most powerful graphics cards in the world. Unsurprisingly, both the parts are already out of stock (exclusive to EVGA Elite members) and you’ll likely gonna have to wait till Feb or March, and that too if have $2,000 lying around.

The KINGPIN Hybrid features three DPs and one HDMI port at the front. At the back, you’ve got the power connectors. EVGA seems to have gone overboard with three 8-pin power connectors which kind of makes sense considering the 450W TDP.

The card comes with a triple BIOS, one with the stock specs, one with factory overclocked frequencies and the third one for use with LN2. There are also PROBEIT outlets for checking the various voltages in-game.

The KINGPIN hybrid features a single fan for keeping the VRM and memory chips cool and a 360mm radiator connected to the pump to cool the graphics core. Apart from that, you also get your regular dose of LED lighting. There’s an OLED display on the side which can be used to display up to 9 GIF animations at 176×48 pixels.

As expected, both the KINGPIN cards come with the 450W XOC BIOS and a factory overclock of 1920MHz (from 1.70GHz).

Then you’ve got the KINGPIN Hydro Copper designed specifically for overclockers who play around with LN2. It features a copper water block and also happens to be the only single-slot RTX 3090. It comes with EVGA’s TEK-9 Icon 4.0 and Mini LN2 ports for use with liquid nitrogen without making any modifications to the card. 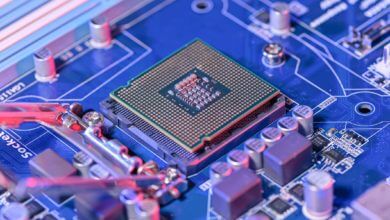 Intel Continues to Lead Heavily in the Chinese CPU Market