Like the mainstream Ryzen 3000 desktop CPUs (Matisse), the Ryzen 4000 mobile APUs are based on the 7nm Zen 2 core. As such, they boast strong single-threaded and gaming performance along with an emphasis on power efficiency.

With Intel’s Ice Lake parts limited to quad-core designs and the hex-core Comet Lake essentially being another rebrand, AMD’s Renoir chips are some of the most powerful processors on the mobile market.

Right off the bat, let’s have a look at the specifications. First the low power 15W Ryzen 4000U lineup:

As you can see the 15W Ryzen 4000U lineup has gotten five SKUs with a possible Ryzen 9 in the pipeline. The reason being that slim form-factor notebooks are everywhere these days. It’s what the average user looks for. True to their tradition, AMD has gone with the “moar core” philosophy, and for good reason. Pretty much every application from gaming to browsers leverages up to 8 cores nowadays.

The Ryzen 4000U lineup starts off with the quad-core Ryzen 3 4300U which we recently found out to be on par with Intel’s Core i7-7700HQ. The Ryzen 5 and 7 both have two variants each. One a hex-core and the other an octa-core part, with each offering an SMT model. The GPU Compute count scales linearly from the Ryzen 3 to the Ryzen 7, with the former offering 5 and the latter topping out at 8.

The Renoir based Ryzen 7 APUs will power the world’s first low-power, ultra-thin notebooks with as many as 8 x86 cores and 16 threads. That’s not it though. There will also be 14″ models in the future featuring the high-performance H-series APUs. The ASUS Zephyrus G14 is one of the first such devices. It packs a Ryzen 7 4800HS and an NVIDIA RTX 2060 paired with a 14″ 1080p 120Hz display. This is the world’s first 14″ notebook to pack a 35W high-performance processor in such a form factor. Till now, all 14″ devices based on Intel’s chips were based on the 15W (or 25W) U series CPU.

As you can see, the H series ditches the lower-end Ryzen 3 variant. AMD is probably leaving the U series chips for the average user while the H series will serve creators and gamers. This clearly evident from the corresponding core counts. The former offers a lot more variety with four to sixteen threads while the latter is essentially a two-product catalog, one with twelve threads while the other with sixteen threads.

Interestingly, the Ryzen 7 4800U features one more graphics core than the 4800H. While the Ryzen 9 4900H (HS) does feature 8 CUs, they will almost always be coupled with a dGPU. As such, the iGPU in these chips won’t be used for high-performance workloads like gaming.

AMD’s Ryzen 4000 APU lineup is monolithic in design, rather than MCM (Multi-Chip Module) like the Ryzen 3000 desktop series. This means that we’re getting much better latencies and simultaneously higher clocks. We’re basically looking at one CCD comprising of two CCXs paired with a 7nm Vega graphics core using the Infinity Fabric.

AMD Explains why the Ryzen 4000 Mobile APUs Don’t Use the Chiplet Design; Vega Instead of Navi

Considering that the integrated graphics communicate with the CPU using the fabric, faster memory will have a notable impact on applications leveraging the former. As such before buying a Renoir laptop, make sure you check the memory speeds. It’s best to opt for a DDR4-3200 model or an LPDDR4 variant with 4266MHz or faster memory. The deltas in performance can be especially glaring in games like Assassins’ Creed.

Compared to the desktop Ryzen 3000 series, Renoir features a reduced L3 cache. This is understandable as there’s a single die and a huge “GameCache” is not required to keep the inter-chiplet latency in check.

With Renoir, AMD claims an IPC uplift of 25% over the older Picasso APUs along with a 20% reduction in power draw. In addition to this, the Ryzen 4000 parts also get a healthy 400 MHz (4900H) boost in terms of the core clocks which will have a meaningful impact in real-world scenarios especially gaming.

Similar to the Matisse counterparts, the Renoir chips are based on TSMC’s 7nm FF process. They feature an insane 9.8 billion transistors on a 25x25x1.38mm die. That’s twice as much compared to Picasso, while also cutting the die size by 25%.

As far as the fine-grained architectural details are concerned, the same improvements to the front-end and back-end of the core are present as the desktop Ryzen 3000 lineup. You can read more here:

The core features of the Zen 2 core architecture are:

The graphics part of things is less interesting but equally impressive. Basically, it’s the older Vega GPU with the same number of CUs. However, thanks to the super-efficient 7nm node, AMD has been able to extract a lot more performance out of the old graphics parts.

According to AMD, each Compute Unit in the Ryzen 4000 APUs is as much as 60% faster than Picasso. The overall FP32 compute horsepower increases from 1.41 TFLOPs to 1.79 TFLOPs (27%). These gains come from three areas: significantly higher graphics clock, wider memory bandwidth, and an improved Infinity Fabric design.

One of the main challenges with mobile CPUs is keeping the power draw low enough so that you can extract a decent battery life out of the device. Renoir achieves this with the help of the 7nm process which is the most advanced in the industry. The use of LPDDR4X and the monolithic design further cut-down the power draw and offer sufficiently higher performance per watt.

There have also been several software-side and kernel improvements. Compared to Picasso, the power management is vastly superior with a highly dynamic clock frequency resulting in an almost 60% lesser power draw.

One of the key areas which helped with the idle power draw and passive performance is the inclusion of multiple ACPI power profiles. With Picasso, there was only one. This would lead to increased latency when the system jumped from the low-power state (idle) to active. Furthermore, the CPU cores had to cross multiple states to get from the parked to the high-performance mode.

With Renoir, there are three C states. The most reactive C1 has only one high-performance hardware power state while C2 has two. This means that the CPU latency required to go from idle to active will be much lower, and when in use, it won’t step back to low power mode, resulting in a snappier interface and faster application execution.

The processor stays in the high-performance C1 state whenever in use, and then slowly steps down to C2 when left inactive while prolonged idleness results in a switch to C3.

Overall, the frequency and thereby the power draw are governed by the user activity. Higher user activity will keep the core clocks dynamic, resulting in more frequent peaks while reduced activity will slowly push the CPU cores into parked mode.

This is something AMD has talked about a lot. In general, when either the dGPU or the CPU is idle, the other can’t exploit the additional power headroom available. Thanks to AMD’s SCF (scalable control fabric) which is part of the Infinity Fabric, this can be fixed.

This lets the GPU increase its boost clocks when the CPU is drawing lesser than the allowed power or vise versa, bolstering the gaming performance without any penalties.

The Dell G5 SE is the first laptop to feature SmartShift. It packs the Renoir APUs along with the Navi based Radeon RX 5600M as well as support for FreeSync.

Another new feature that allows maximum performance in the thinnest form factors is the new System Tracking Technology V2 (STTv2). It uses multiple sensors embedded in the chassis hotspots to determine whether boost clocks can be maintained for longer than usual.

Using STT v2, the Renoir chips can boost higher than traditional chips by evaluating the data received from various sensors and override the artificial application thermal ceiling. This will be helpful in thermally restrictive chassis where the thermal bottleneck usually limits the boost clock despite the power draw staying well within range.

The Ryzen 3000 “Picasso” processors marked AMD’s return to the notebook space, offering portable gaming machines at competitive prices. However, gaming performance and battery life still left a lot to be desired. With Renoir, AMD is not only looking to compete but outright demolish Intel’s monopoly in the notebook space. You’re getting more performance, longer battery life and slimmer form factors, that too at more competitive prices. 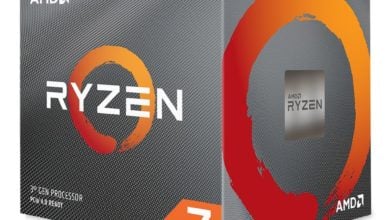